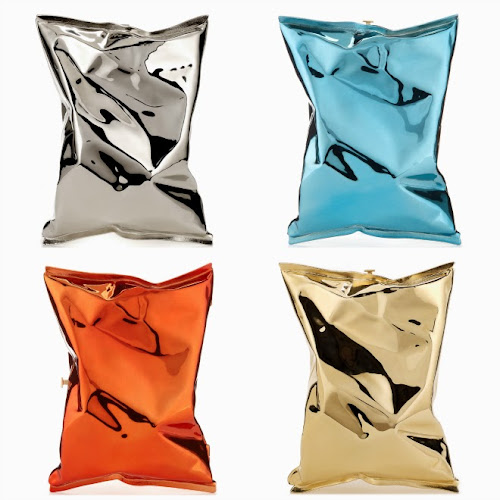 The Anya Hindmarch Crisp Packet clutch is one of the most talked-about pieces from the Spring Summer 2014 collection.

Inspired by the seemingly ordinary crinkles and folds of a crisp packet, this clutch from Anya Hindmarch is a striking piece guaranteed to catch the eye. The rippling surface is rendered in inflexible sheet metal, playing with the idea of structure and material.

Anya Hindmarch team spent many months working with specialist artisans in Italy to perfect our Crisp Packet clutch, ensuring each one is a unique piece of wearable art. Inspired by Anya's passion for making the everyday extraordinary, it comes with a detachable chain strap so it can also be worn across the body or on the shoulder but crisps not included. ;(

Intended as a luxurious take on space litter, the Crisp Packet clutch took months and months to perfect, specifically the high-shine finish and vertical opening. It was photographed from every angle using 100 tripod-mounted cameras to create a computer-generated 3D rendering used to test different shapes, colours and textures. After testing for ergonomics and wearability, the prototype was then taken to Florence where it was made in a factory that specialises in jewellery and intricate metalwork.

“The crisp packet was inspired by my love of everyday objects which are made in the most luxurious way by incredible craftsmen,” Hindmarch says. “It is very complicated as it is completely asymmetrical and took many goes to get right. It was a real labour of love. But we love it.”

Each one takes seven hours to make, weighs in at just under 500g and is slightly bigger than the original Walker’s crisp packet. It is available in metallic blue, orange, silver and gold, with a suede lining and detachable chain strap.

Hindmarch calls it a “perfect little clutch and actually a little piece of art. It is really modern, and a forever classic, I think.” 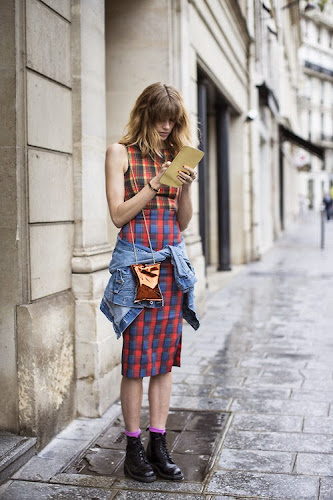 The waiting list ahead of the first delivery was so long that by the time the clutch arrived, it sold out in three hours.

at August 16, 2014
Email ThisBlogThis!Share to TwitterShare to FacebookShare to Pinterest
Labels: Anya Hindmarch

When you think that fashion is finished and nothing new can be invented, think twice. Simon Porte decides to think small, instead of ...